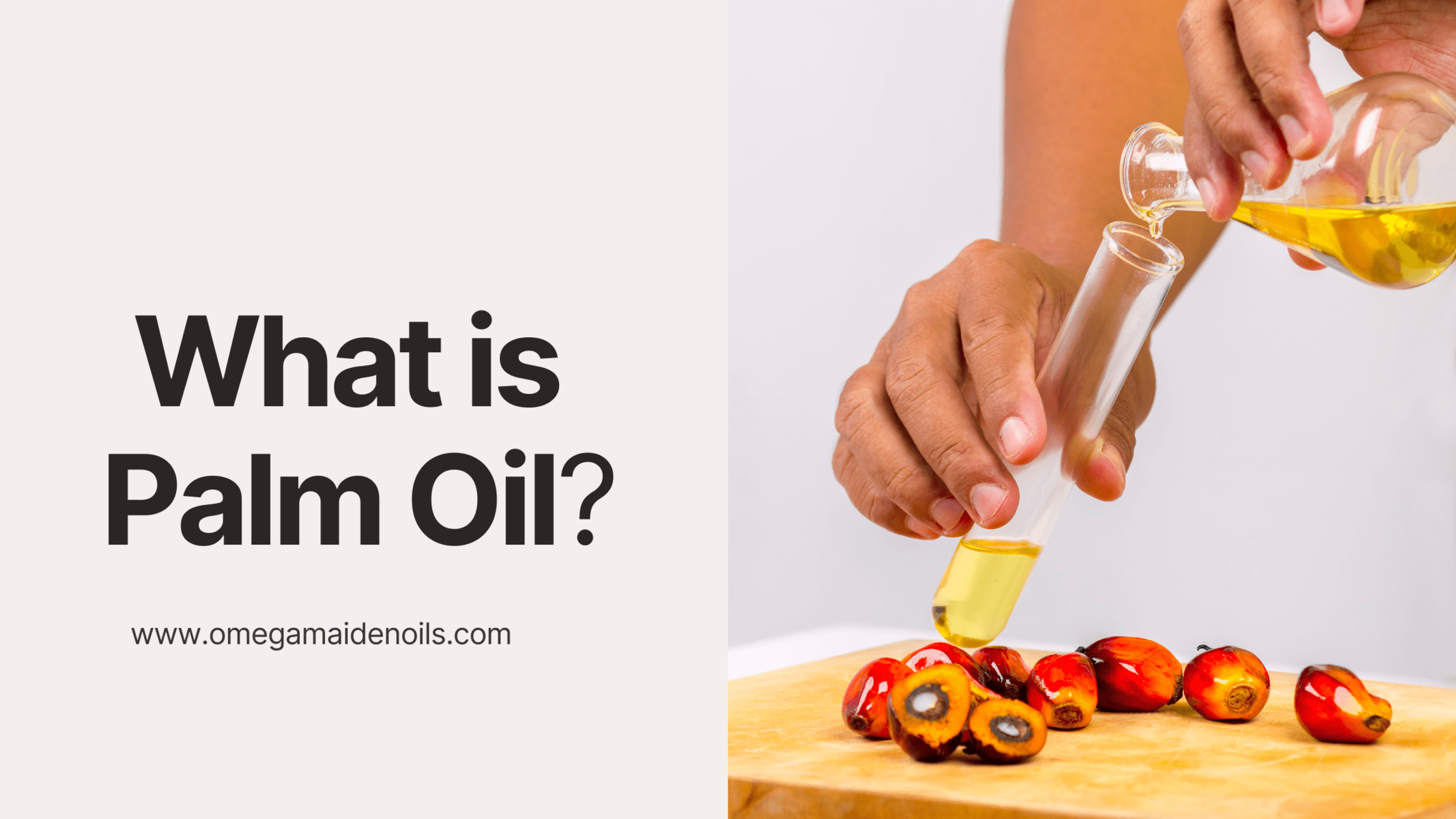 Palm oil is a type of vegetable oil that is derived from the palm fruit, which grows on the African oil palm tree. Palm oil has been used for centuries in Africa and Asia for cooking and as a traditional medicine. In recent years, palm oil has become increasingly popular as an ingredient in processed foods, cosmetics, and biofuels.

The high demand for palm oil has resulted in large-scale deforestation and habitat loss for many animals, including endangered species such as orangutans. The production of palm oil also creates significant greenhouse gas emissions. For these reasons, it is important to be aware of the environmental impacts of palm oil before using it.

Palm oil is a type of vegetable oil that is derived from the palm fruit, which grows on the African oil palm tree. Palm oil is widely used in food products, cosmetics, and even biofuel. The palm fruit contains a high amount of saturated fat, which makes it an ideal ingredient for many processed foods.

It also has a long shelf life and does not easily go rancid. In addition to being used in food products, palm oil is also used in making soaps, detergents, and candles. Although palm oil can be beneficial, it also has some drawbacks.

One major concern is that the large-scale production of palm oil is contributing to deforestation and habitat loss for many animals, including Orangutans. Another issue is that Palm Oil plantations are often associated with social injustice and poor working conditions. If you are concerned about these issues, you can look for products that contain sustainable or certified organic palm oil.

You can also avoid buying products that list “vegetable oils” as an ingredient since this could be derived from any number of sources, including unsustainable Palm Oil plantations.

Why is Palm Oil Bad

Palm oil is a type of vegetable oil that is derived from the palm fruit, which grows on the African oil palm tree. Palm oil has become a popular ingredient in many processed foods and cosmetics due to its low cost and versatility. However, there is growing evidence that palm oil production is having a devastating effect on the environment and human health.

The primary environmental concern with palm oil production is deforestation. In order to make room for new palm plantations, huge tracts of rainforest are being cleared, often using slash-and-burn techniques that release enormous amounts of carbon dioxide into the atmosphere. This destruction of natural habitats also leads to the loss of valuable biodiversity, as well as putting indigenous people who have lived in these forest’s for generations at risk.

The end result is an ecological disaster that is contributing significantly to climate change. From a human health perspective, palm oil contains high levels of saturated fat which can raise cholesterol levels and increase the risk of heart disease. Additionally, many small-scale farmers who produce palm oil are paid very poorly and work in dangerous conditions.

Child labor is also common in the industry. So not only is palm oil bad for your health, it’s also likely that it was produced by workers who were treated unfairly and given little choice but to work in hazardous conditions. Given all this information, it’s clear that we need to be doing more to limit our consumption of products that contain palm oil.

But changing consumer habits isn’t easy – after all, most of us don’t even know when we’re eating or using products containing palm oil! That’s why it’s important for companies to be transparent about their use of palm oil and give consumers the option to choose alternative products . It’s only through public pressure that we can hope to bring about real change in an industry that desperately needs it .

Is Palm Oil Harmful to Health?

Palm oil is a type of edible vegetable oil that is derived from the fruit of the African palm tree. It has been used in traditional African cuisine for centuries and is a common ingredient in many processed foods. Palm oil is high in saturated fat and has been linked to heart disease, obesity, cancer, and other health problems.

While some studies have shown that palm oil may have some health benefits, such as preventing vitamin A deficiency, it is generally considered to be harmful to health.

What is Palm Oil And Why is It a Problem?

Palm oil is a type of vegetable oil that is derived from the fruit of the African oil palm tree. It is one of the most widely used oils in the world, and can be found in everything from soap to candy to cosmetics. However, palm oil production has come under fire in recent years due to its devastating environmental impact.

When produced sustainably, palm oil can be a relatively environmentally friendly product. However, the vast majority of palm oil is produced unsustainably, with little regard for the destruction it causes to forests and wildlife. Palm oil plantations are responsible for massive deforestation, as well as pollution and soil erosion.

They also often displace indigenous people who have lived in these areas for generations. Wildlife such as orangutans are particularly threatened by unsustainable palm oil production, as their habitat is being destroyed at an alarming rate. Moreover, many animals are killed or injured during the clearing of land for palm plantations.

The good news is that more and more companies are starting to take sustainability seriously when it comes to palm oil production. But there’s still a long way to go before this destructive industry is truly reformed.

What is Palm Oil And Why is It in Everything?

Palm oil is a type of edible vegetable oil that is derived from the palm fruit, which grows on the African oil palm tree. Palm oil is used in a variety of food products, as well as in cosmetics and cleaning products. It has become a controversial ingredient in recent years due to its environmental impact.

The palm fruit is native to West Africa, but it now grows in tropical regions all over the world. The trees are tall (up to 20 meters) and have large leaves that grow from a central trunk. Each tree can produce up to 30 fruits per year.

The palm fruit contains a high amount of oil (about 50%), which is why it is used for commercial purposes. The main producers of palm oil are Indonesia, Malaysia, and Thailand. After the fruits are harvested, they are crushed to extract the palm oil.

This process usually takes place at large factories or mills. The extracted oil is then refined and often fractionated (which means that it is separated into different types). refined bleached deodorized (RBD) palm olein – this is the most common type of palm oil; it has a neutral taste and smell, and a high smoke point, making it ideal for cooking;

refined non-bleached deodorized (RBDN) – this type has similar properties to RBD palm olein, but with a slightly higher acidity level; crude / unrefined – this type of palm oil has not been processed and still contains impurities such as free fatty acids; it has a reddish color and an earthy flavor; virgin / extra virgin – this term generally indicates that the crude Palm Oil has undergone minimal processing; however there is no official definition or standards for these terms when applied to Palm Oil.

So what’s the big deal with Palm Oil? Why all the controversy?

Well, unfortunately, the expansion of Palm Oil plantations has led to some major environmental issues. Firstly, forests are being cleared at an alarming rate to make way for new plantations – an area roughly twice the size of Belgium was deforested between 2000 and 2005 alone! This deforestation results in habitat loss for many animals – including Orangutans which are now critically endangered as their homes are being destroyed . In addition, peatlands – which act as huge carbon stores – are often drained and cleared for planting palms , resulting in significant greenhouse gas emissions .

These emissions contribute towards climate change , which threatens both people and wildlife across the globe . Finally ,the use of pesticides and fertilizers on Palm Oil crops can lead to pollution of rivers . This not only harms biodiversity , but also affects local communities who depend on these waterways for drinking water , washing , fishing etc . All in all , it’s clear that there are some serious environmental concerns surrounding Palm Oil production .

However ,it’s important to remember that Palm Oil itself isn’t necessarily bad ; after all , it’s just an ingredient like any other . The problem lies with unsustainable farming practices . If we want to continue using Palm Oil , we need to ensure that it’s produced responsibly . That means supporting companies that adhereto rigorous sustainability standardsand working towards developing more sustainable methodsof cultivation..

Is Palm Oil the Same As Coconut Oil?

Coconut oil also has a more neutral taste than palm oil, which can be quite strong-tasting on its own. And finally, coconut oil contains more Lauric acid than palm oil – this particular fatty acid has been shown to have antibacterial and antiviral properties.

Why Palm Oil Is So Cheap

Palm oil is an edible vegetable oil that is extracted from the fruit of the African oil palm tree. It has been used in Africa for centuries as a cooking oil, and it is now also used in a variety of products including margarine, soap, and cosmetics. Palm oil is a highly efficient crop, yielding more oil per hectare than any other vegetable oil crop.

This makes it an important source of income for smallholder farmers in Africa. However, palm oil production can have negative environmental impacts, including deforestation and habitat loss.